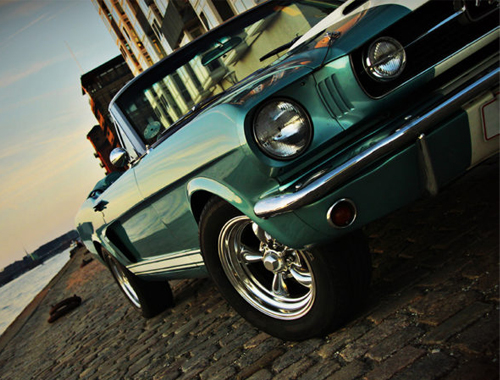 22 Jul A Dad, a Son, and an Electric-powered Vintage Ford Mustang

My son (I call him Big A in my online posts) turned 15 this spring and he is counting the days until he gets his learner’s permit to begin driving. For as long as I can remember, Big A has had a fascination with all things automotive. Most of his tastes have leaned toward superfast cars like Lamborghinis and Ferraris (not surprising for a kid who loves cars), but he also loves trucks. One other brand he loves is Tesla.

At the end of 2016 over Big A’s winter break, we took a family test drive of the Tesla SUV, which was probably one of the best Christmas presents we gave him that year. The only thing that would have made it better would have been to buy or lease one of the Tesla models, but we weren’t really in the car market at the time. We just wanted to take him on a ride in a vehicle that he thought was really cool. The flying doors, the large dashboard display, the autonomous driving, the supercharged acceleration, and customized seats were all fascinating. He also loved the fact that it was electric.

My son comes from a line of car-enthusiasts. My grandfather usually bought a new one every two years, ultimately acquiring his dream vehicle — a Lincoln Town Car. My brother-in-law regularly tinkers on his collection of older cars which are BMWs, Mercedes and other assorted brands.

For Big A’s first car, he has his mind fixed on finding an old model (something like a late 60s or early 70s Ford Mustang) and rebuilding it — perhaps even converting it from an internal combustion engine to an electric-powered model.

After completing a Crossfit workout a couple of weeks ago, Big A and I walked to the Audi dealership to take a peek at the new Audi e-tron (since it was featured in the Avengers Endgame movie), then stopped at the Porsche dealership to get a glimpse of the Porsche Panamera E-hybrid. We really wanted to see the promised Porsche Mission E, but it’s still not available on the market.

We are interested in acquiring or leasing an electric vehicle, but we want more options. Currently, I drive a 2013 Ford Fusion Hybrid that typically gets in excess of 40 miles to the gallon. It has over 100K miles and still drives as well as it did when I first bought it. In fact, the mileage has improved the longer I have owned and driven it.

While Big A’s first vehicle may not be an electric vehicle, it’s exciting to see how interested he is in the technology, power and features that come in the electric vehicles. Who knows?? We may have an electric-powered, vintage Ford Mustang in our future.